← more from
Beyond Beyond is Beyond Records
Get fresh music recommendations delivered to your inbox every Friday. 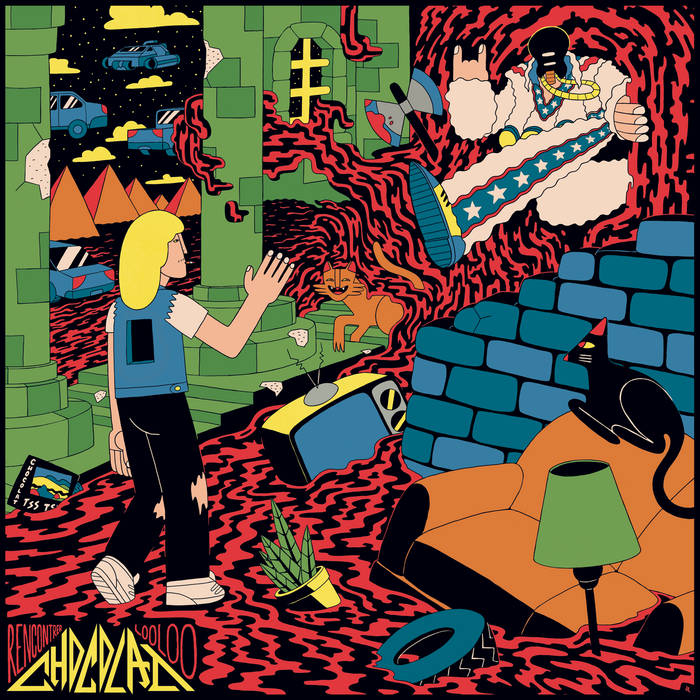 Justin Jakimiak fuzzed out, exciting, danceable rock n roll! really excited for my green vinyl to show up on my doorstep

It’s been waiting to happen. Beyond the mystical pyramids and the mountains of Mars, Looloo’s silhouette emerges. A demigod born out of intergalactic dust, this exalted creature moves to the music of an epiphany laden with pretzels and Cherry Coke bottles. Its electric guitar-shaped head chants the arrival of a new Golden Age of distortion, an inescapable voyage to the end of the world to reconnect with the beings who brought us intelligence and hard rock. If you could only see it, you would understand...

Then one day, a band falls under its spell. Suddenly entranced by Looloo’s incomprehensible Sanskrit babble, the musicians are awakened to a desire for transcendence and communion of the spirits. As if each one of us were a small speck in the constellation created by Looloo’s vintage leatherette one-piece suit. Surely this ecstasy and elation will be short-lived.

"Rencontrer Looloo," Chocolat’s second album after an extended hiatus, finds the band swimming through modal waters, somewhere at the confluence of hard jazz and surf metal, blended with a songwriting tradition that the media, for lack of a better term, often define as folk. A far stretch from the psychedelic kraut explorations of "Tss Tss," the new opus is a sort of initiatory account of the band’s journey into orbit. Here Chocolat’s kaleidoscopic visions of space have been replaced by manifestations of stark, shiny white boulders, with edges sharper than a wild jackal’s fangs.

Although Chocolat went on a hiatus, its members weren’t exactly idle. Ysaël Pépin terrorized the globe as the bass player of Demon's Claws. As for Jimmy Hunt, he explored his songwriting through a solo career, which, among other things, allowed him to recruit producer Emmanuel Ethier and keyboardist Christophe Lamarche-Ledoux (also a member of Organ Mood), yielding the wildly contagious "Maladie d’amour" (2013). Shortly after all this infectious madness, some strange force of nature brought the members of Chocolat back together. More fierce and fiery than ever, they released "Tss Tss" in 2014, an album whose expansive psychedelic sound and kraut-inspired repetitions earned the band international recognition and many tours abroad.

"Rencontrer Looloo," which is probably the last release ever recorded at the now defunct Studio Victor, was produced by Emmanuel Ethier, written by Jimmy Hunt, mixed by Christophe Lamarche-Ledoux, and recorded by François-Régis Pagé and Louis-Philippe Kyer. The album features (in alphabetical order) Emmanuel Ethier on guitar, Brian Hildebrand on drums, Jimmy Hunt on guitar and vocals, Christophe Lamarche-Ledoux on keyboards and saxophone, and Ysaël Pépin on bass.

To get a taste of the future, simply follow the three neon red nipples that light the night sky with all their electroluminescent splendor. Once you get there, savour the sweet nectar Chocolat pours you, straight from Looloo’s flaccid and wrinkled breasts. Drink, and drink some more.

Bandcamp Daily  your guide to the world of Bandcamp